Buy it from Insound – Tortoise

After twelve years of expanding the definition of rock music, Tortoise will release a highly anticipated box set, including the long out of print 1995 album Rhythms, Resolutions & Clusters, rare singles from foreign releases and tour EPs, compilation tracks, and previously unreleased material such as remixes by band members and other artists, including Jim O’Rourke, Brad Wood, Rick Brown, Steve Albini, and Mike Watt. The set’s title comes from the paleontological term for a reappearing species, and the release is comprised of three CDs and one DVD, the latter of which contains two hours of footage, several extended live performances, and videos and short films. Packaging is a hard card stock box containing four sleeves and a 20-page booklet with archival photos and liner notes about each track’s origins. 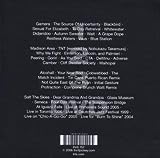